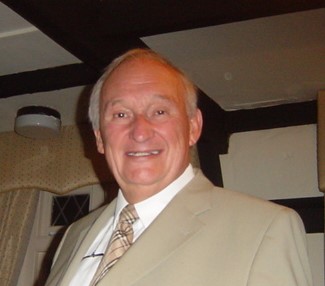 Wales has had many talented bridge players, but few have brought to the game the same adventurousness and all-round exuberance as characterises the approach of Mike Hirst.
Born in Yorkshire in 1936, Mike started his bridge career at the age of 11, having watched his parents playing the game with neighbours. Having taught himself from a book, his first competitive event at the age of 16, was in the Yorkshire Pairs Championship, and despite being shouted at for being late (by the infamous Harold Franklin), he came third.
His first job was with Woolworths as a trainee manager, but he soon switched to Beechams in South Wales (Penarth). He joined the local club and paired up with Bill Griffiths and Peggy Fletcher, his early mentors. Very soon he met Patrick Jourdain, with whom he entered his first Camrose trials, and was selected for his first Camrose against Northern Ireland. He had a suuccessful playing career with Patrick until 1973, winning many major events with team-mates David Johnson and David McAndrew amongst others. Mike has represented Wales in the Camrose on 42 occasions, winning 13 of those matches – an achievement matched by few. He has also represented his country in a host of other international tournaments from the late 60s onwards, and has won the Welsh Cup twelve times. Even in his later years, when he played in few major events, he still maintained his fifth placed ranking of Welsh Premier Grand Masters. But Mike as well as being a metronomic Master Point accumulator as far as it is possible to imagine, he played bridge for the enjoyment and friendships forged at the table, which he cherished as much as his competitive success.
He married Ann, also a Welsh Lady international, and as well as playing bridge together, they shared a keen interest in golf – having owned an apartment on a golf course in the Canaries. Mike was also captain of both his local golf club and rugby club – a truly versatile man.

We will all miss this larger than life character.

[Some of the above content was sourced from a 2007 interview of Mike, published in the WBU Magazine. The full interview can be viewed at Mike Hirst Full Interview]

The WBU needs members’ email addresses to be able to contact everyone. Please Register with ‘MailChimp’ and the WBU will email you personally on current isssues.

Books are spiral bound for ease of use, with acetate protective clear covers front and rear.
£7.95 including UK postage.